Stock and bond returns have benefited significantly from the nearly 4 decades of declining global interest rates. Since the financial crisis, a prolonged period of extraordinary low rates has lifted the price of financial assets considerably. Rates do not just affect the financing costs of corporate and government debt, housing, and commercial real estate, it also becomes the hurdle rate for risk-seeking investors. In other words, in order for an investor to take risk, he or she must get paid a premium over government bonds, whose returns are determined by prevailing interest rates in order to take risk. Given that rates are low, with little room to decline, returns over the next 10 years will be significantly lower in traditional stock/bond assets. One never knows the path the market will take to arrive at these lower returns. However, historically, the markets with higher valuations precede larger market drops than those with lower valuations. We are not making a prediction of a market drop, but sharing what has historically occurred. We believe that investors face a significant risk of failing to meet their goals by limiting their investments to traditional assets.

“The higher the rate, the greater the downward pull. That’s because the rates of return that investors need from any kind of investment are directly tied to the risk-free rate that they can earn from government securities.” 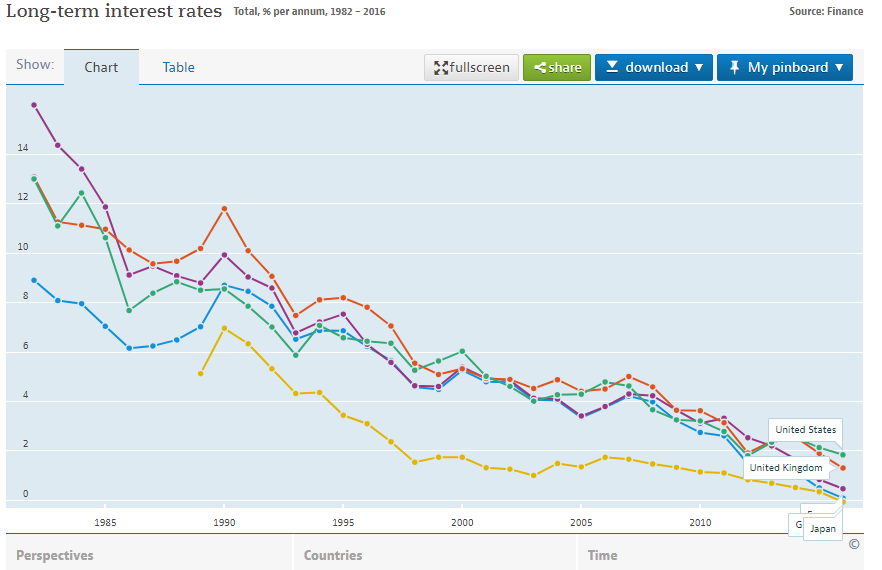 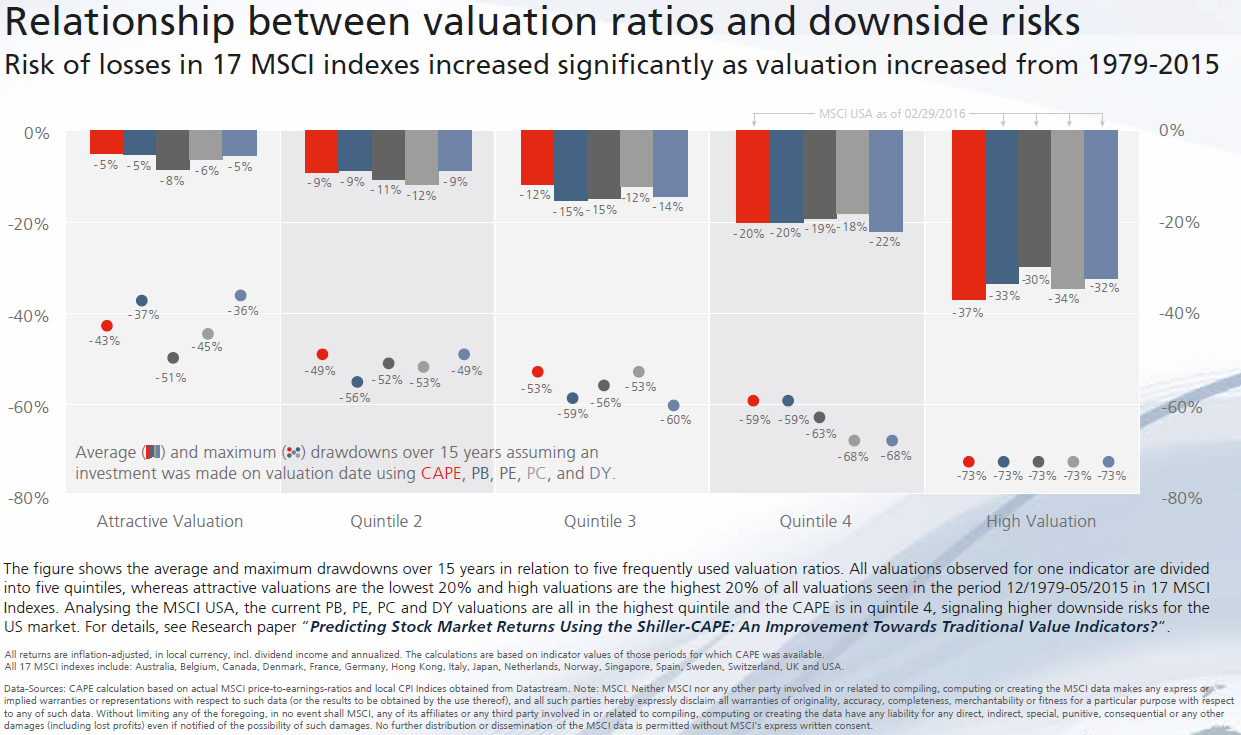 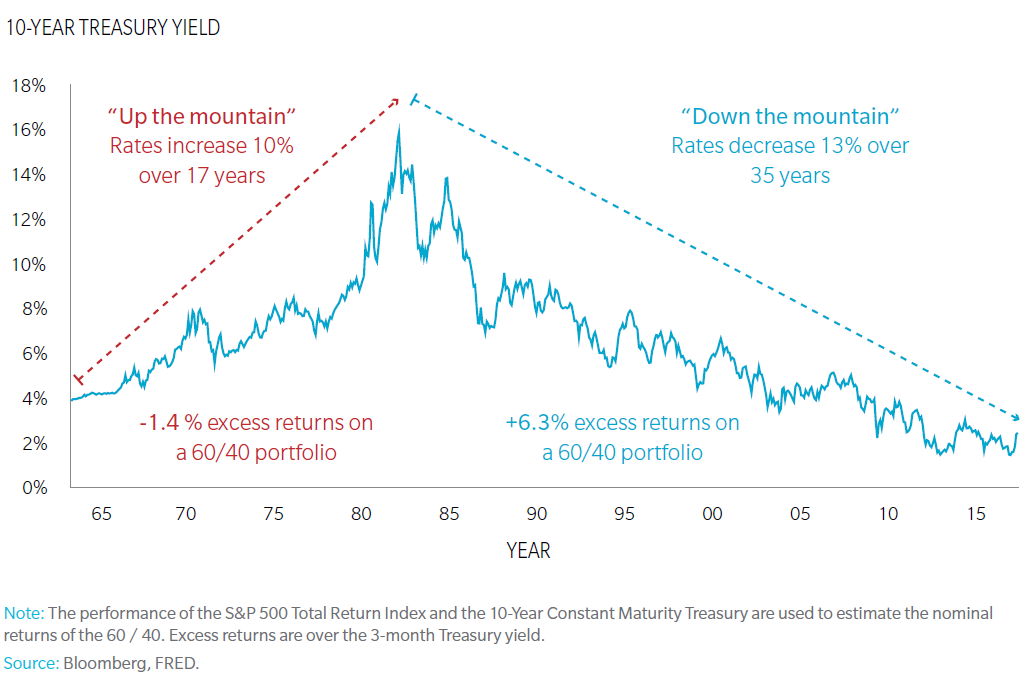 The U.S. has outperformed the rest of the world substantially since the credit crisis in 2008. Also, growth stocks (especially bio-techs and technology stocks) have outperformed value stocks.  Therefore, a combination of international and value has underperformed substantially.  Our stock mix consists of global equities with an emphasis on value. Despite the recent outperformance by growth stocks, history is on the side of value, but cycles are to be expected. Also, international stocks and U.S stocks change leadership over time.

The next two charts show the performance of value versus growth and U.S. versus international stocks. 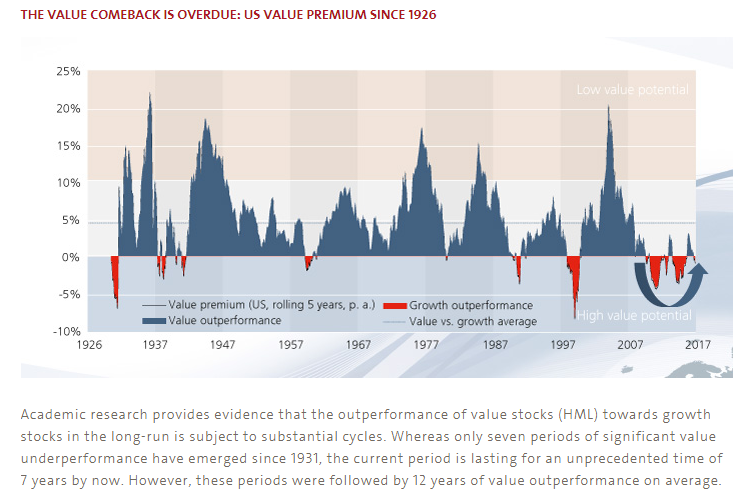 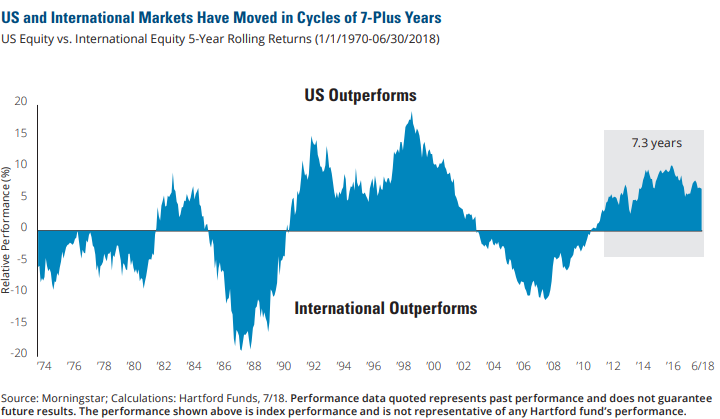 As a result of the headwinds facing traditional asset classes, high valuations and rising interest rates, we believe that Alternative assets (Alts) should have a sizeable allocation across client portfolios. These assets have muted sensitivity to global growth or the direction and magnitude of change in long-term interest rates. Our view is simple, if traditional assets perform much better than we expect, investors will be able to reach their goals in spite of an allocation to alts. Otherwise, alts will represent a vital insurance policy against the subpar returns we expect from stocks and bonds. Note: The Stone Ridge Reinsurance Risk Premium Fund, Stone Ridge All Asset Variance Risk Premium Fund and the Stone Ridge Alternative Lending funds represent Alt exposure in client portfolios.